skip to main | skip to sidebar

The inflatable dingy we used as a tender was getting a little threadbare and since it had no motor, it severely limited our options for use. An inflatable can be very difficult to row in the trade winds.
I decided to build a nesting dingy and after a little research online I settled on the Chameleon nesting dinghy designed by Danny Greene. If you would like a set of plans click his name for the link.
Mr. Greene returned emails promptly and a set of plans arrived within ten days which I thought was very quick considering he lives in Bermuda and I'm in Hawaii! 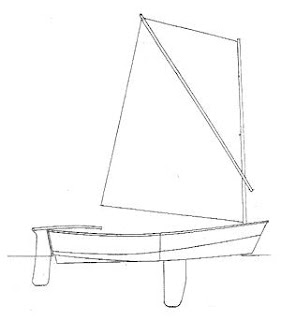 I have never built a "stitch & glue" dingy before and thought it would be a fun project.
This one would be built outdoors, without the comforts of a shop.
The dingy is 10' 4" overall length, about 4' wide, and is reputed to row and sail well.

We started the project at the Ala Wai boat harbor.
My Alberg was in her slip thirty feet from the truck so we had power available while we started the project. The plans were well written and the grid pattern was laid out on the sheets of plywood and we cut out the pieces per the instructions. Many thanks to Jeff, Nick, Wallace & Christine for the extra hands and help cutting, holding, zip-tying, etc. Its a challenge working with light pieces of plywood in twenty knot trade winds! 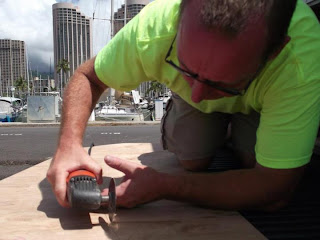 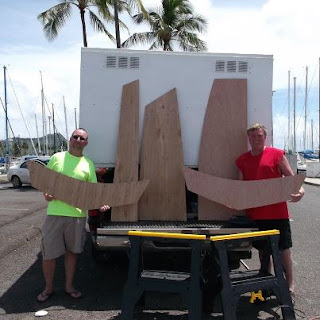 Once we had the pieces all cut out we started to assemble it using some utility rope to "spring" it together. We were rookies and it took some trial and error to figure out how best to approach it but before too long it started taking shape. 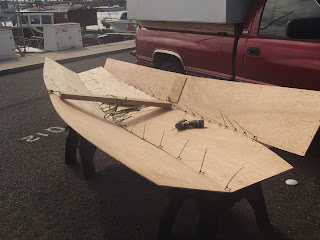 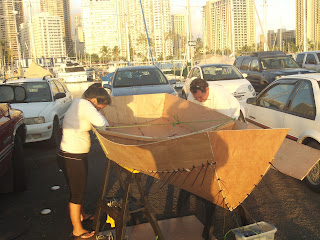 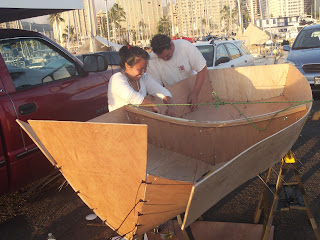 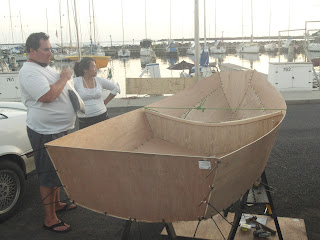 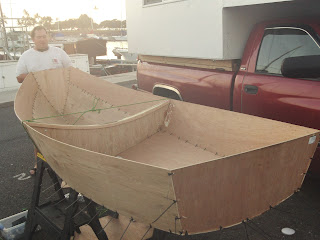 We filleted the seams with west systems epoxy and 406 colloidal silica. We loaded it on the tailgate and let the fillets cure overnight. 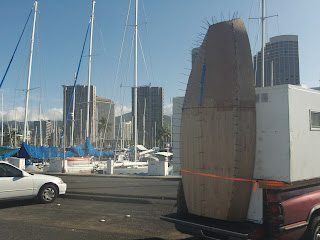 The next day we split the halves and cut the tie wraps off and did a little fill & fairing with the dingy placed on the dock box. In hindsight it would have been better to drill the holes for the tie wraps closer to the edges of the plywood so that the fillets would not have to be so wide in order to cover them. 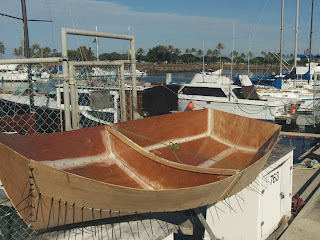 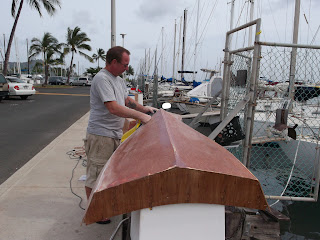 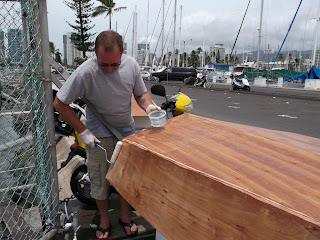 Very cool! Has me envisioning a "build a boat" project with Kai when he is older. :)

It fits good on the bow. I store it in the truck for now and don't have any pictures of it on the boat.
Cheers, Don